The SecondHands project has been presented at the 20th Towards Autonomous Robotic Systems (TAROS) 2019 Conference, at Queen Mary University of London, from the 3rd to the 5th of July 2019.

The conference, hosted by the Centre for Advanced Robotics at Queen Mary (ARQ), presented contributions in several areas of robotics, from soft robotics to locomotion, planning and grasping, and it is an important even within the UK. Among the keynote speakers was Prof. Aude Billard, which is also one of the principal investigators of the Secondhands project and presented some of the scientific achievements of the project.

The results of Secondhands were showcased at a dedicated booth, where staff if Ocado Technology described the aim and vision of the project and the recent achievements of the consortium. The booth attracted good interest from the audience as an average of 20 – 25 people discussed the scientific achievements and the possible exploitation of the project. 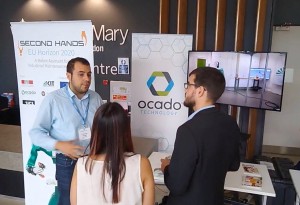 Invited talk at #IROS2019 workshop on proximity perception in robotics, talking also about @OcadoTechnology and our @secondhands_eu project

For #TAROS2019, and as we can't be there @ARQ_QMUL @QMULSEMS today, we've changed our logo to match the colours of this #IncredibleConference and show our #ContinuingSupport! Best of luck to all the speakers and exhibitors including @OcadoTechnology and
@secondhands!
#Robotics

You can find our team presenting @secondhands_eu project at #TAROS2019 conference @QMUL in London.

It's been wonderful working with this great team towards a successful result! @secondhands_eu @ALCORLab https://twitter.com/secondhands_eu/status/1146338739809148929

This project has received funding from the European Union’s Horizon 2020 Research and Innovation programme (call: H2020-ICT-2014-1, RIA) under grant agreement No 643950 .