The SecondHands project at CeBIT 2018

The SecondHands project has been showcased at the CeBIT technology exhibition, in Hannover, Germany, from the 11th to the 15th of June.

The SecondHands stand attracted a lot of interest from visitors and the local media. The team at KIT performed more than 50 demonstrations of the SecondHands robot, ARMAR-6, helping a human technician in doing maintenance work of Ocado’s highly automated warehouses (Customer Fulfillment Centre).

The SecondHands project team demonstrated the humanoid robot ARMAR-6 collaborating with a human worker in a bimanual overhead task and performing force-based bimanual manipulation, vision-based grasping, fluent object handover, human activity recognition, natural language based human-robot dialog and interaction, navigation among many other features. The use case shown in the demonstrations was supplied by Ocado. In a complex maintenance task demonstration, the robot was able to recognise the need of help of a technician based on speech, force and visual information.  The demonstrations were filmed by national and international televisions and was ranked as one of the top CeBIT 2018 highlights. 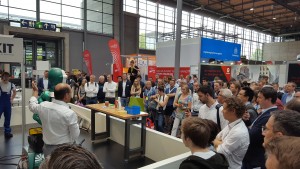 The CeBIT exhibition is one of the largest and most representative technological exhibitions in the world. It covers hot topics and trends in digital technology such as AI, robotics, Internet of Things and big data among others. It covers the digitisation of business, government and society from every angle. In 2017, more than 200,000 people attended CeBIT. 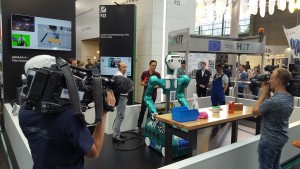 Other press resources on the exhibition are available at this and this link in German.

Invited talk at #IROS2019 workshop on proximity perception in robotics, talking also about @OcadoTechnology and our @secondhands_eu project

For #TAROS2019, and as we can't be there @ARQ_QMUL @QMULSEMS today, we've changed our logo to match the colours of this #IncredibleConference and show our #ContinuingSupport! Best of luck to all the speakers and exhibitors including @OcadoTechnology and
@secondhands!
#Robotics

You can find our team presenting @secondhands_eu project at #TAROS2019 conference @QMUL in London.

It's been wonderful working with this great team towards a successful result! @secondhands_eu @ALCORLab https://twitter.com/secondhands_eu/status/1146338739809148929

This project has received funding from the European Union’s Horizon 2020 Research and Innovation programme (call: H2020-ICT-2014-1, RIA) under grant agreement No 643950 .